“If you don’t enjoy what you do, you’re in the wrong profession,” says Ian Mutwiri, a lawyer who finds joy from his chicken farm.
Mutwiri says his short stint as a lawyer was uneventful.
“The job was fulfilling from an economic perspective, but it was emotionally straining. I felt I wasn’t emotionally satisfied.”
Once he graduated with a degree in law, he secured a job in the banking industry, only to realize that he wasn’t happy.
He quit his job in 2010 to venture into business. After trying his hand in a number of businesses, including real estate and branding.
As a 25-year-old, he was looking for an economic activity that he liked, and farming was a clear favorite.
He conducted intensive research on pig and rabbit farming, but these came out as too sophisticated for his liking. For instance, he says he found out that these two ventures needed lots of planning in terms of space, market for the meat, and feeds. Eventually, he settled on poultry farming and singled out layers and broilers as his niche.
A greenhorn in the poultry industry, he was initially discouraged by the high costs of feeds and the risks involved.
Not one to give up easily, he decided to try Kienyeji chicken.
The breed was fronted by the Kenya Agricultural and Livestock Research Institute (KALRO).
“The breed had just been launched and as such, there was scanty information on the internet about it.”
He had to visit the KALRO offices to learn more about it.
Impressed by its prospects, he immediately ordered 200 chicks. But there was a challenge. The chicks were to be delivered a month later as he didn’t have ready chicken coops from where he could raise them.
“I went back home and leased a small piece of land in Ruaka, where i constructed some coops. The lease cost Kes5000 per month.
He then registered his business, Homerange Poultry Kenya to rear Kienyeji chicken for sale. He owns over 5000 chicken which earns him a tidy sum.
His farm in Ruaka hosts over 2000 birds while another in Syokimau is home to 3000 chicken.
He established Homerange Poultry in 2013. He provides farmers with quality chicks, and trains them to build success in their respective farming ventures.
Even though Kienyeji chicken take long to mature, he chose this breed since it’s cheap to manage as far as feeding costs go.
“Compared to exotic breeds, Kienyeji chicken are more economical to rear,” he says.
The chicks are also resistant to diseases and more resilient than other breeds, including the ordinary Kienyeji chicken.
“I sell a day old chick at Kes120, a month old chick goes for Kes300 while a mature chicken fetches Kes800 in the market.” He says the Kienyeji chicken is more profitable.
A tech savvy man, he exploits digital platforms to learn tips on poultry farming. He has written a comprehensive guide on Kienyeji chicken, which he sells at Kes850.
“The market is there. You can’t satisfy demand for Kienyeji chicken in Kenya.”
He says he occassionaly receives overwhelming orders for day old and month old chicks. Kienyeji chicken are a favorite for moat people who are into healthy eating. They are reared in a natural way and are fed using different kinds of feeds, including kitchen leftovers. They can also be free-range, just like traditional chicken breeds.
Improved Kienyeji breed is a breath of fresh air for most rural and urban farmers.
Traditionally, most homesteads kept a few chicken, leaving them to scavenge for their own food. With the improved Kienyeji, you can have more resilient chicken that mature fast.
Having tasted success with this breed of chicken, he is generous enough to help his fellow farmers to make money.
His training sessions have so far benefitted more than 5000 people.
So, what does it take to succeed as a poultry farmer?
Mutwiri says it all starts with record keeping.
“You need to keep complete and accurate records of daily egg production, feed intake and hatching.”
Medication and vaccination records are also important as they help you to know the probable cause if a problem in case of a disease situation.
“Record keeping enables you to know whether you’re turning in a profit or a loss.”
To stay ahead of the pack, Mutwiri launched M-Kuku, an SMS based platform that provides farmers with essential poultry farming information. These include farming tips, information on hatching and incubation, this on diseases, feeding and markets.
“Our aim is to reach out to many farmers, especially those in rural areas who might not have access to the internet.”
Mutwuri’s venture has been a success if his milestones are anything to go by.
He has distributed over 250000 chicks to farmers, grown the number of his chicken from 200 to the current 5000.
Besides, he has over 50 distribution networks.
His dream is to popularize the improved Kienyeji breed in the country, by encouraging more farmers to rear it and creating a ready market for the birds. 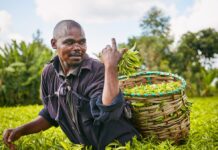 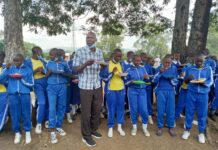 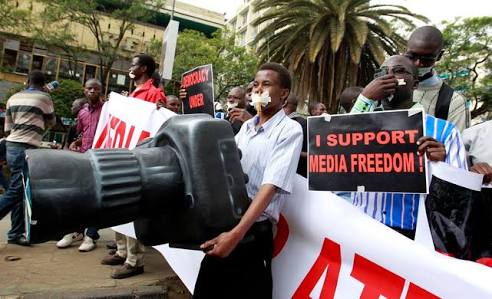